I have a crush on this boy in Barcelona.

Don't laugh! I'm totally smitten (check my twitter) and, when I wasn't posing bottles for beerporn or biking around the city on a beer treasure map hunt, I was heart shaped eyes staring at the boy.
Romantic longing is a great motivator for travel.

And so is beer hunting. 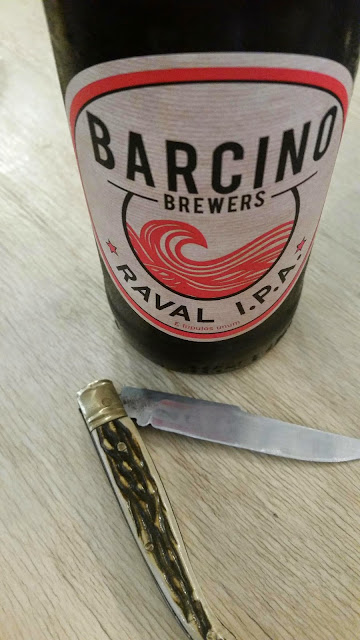 Barcelona, like a lot of places around the EU, is budding with craft beer interest. The culture is spreading! So much so that new things are opening up every few months.

Newest of them is BlackLab brewing. An American influenced brewpub with a trendy handsome American head brewer, outdoor seating around the corner from the beach and some guest beers to compliment their fairly well done house brews.

Although I skipped out on the brewery tour (8.50€ for an hour long tour with the brewer, a tasting flight, half pint of beer and a souvenir), I had some great chats with staff and regulars.

I could get used to this kind of service. 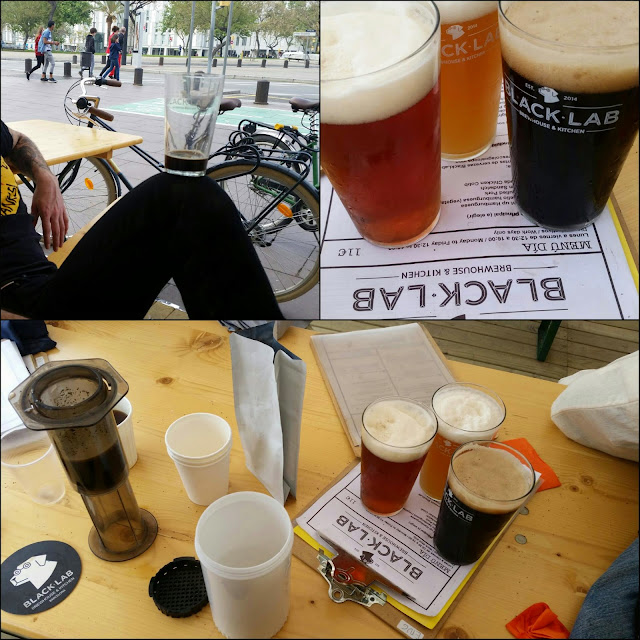 The Dry Stout was pretty killer. Vanilla notes, well balanced and perfect on the palate for the style. I had a few, while the coffee people aeropressed.

"Go to Caravelle, get the beer map, bring back beer."
-the boy

I have to find a paper map to find good beer? What kind of circus is this place? He said that I wanted the map, I wanted to use Google, but then... I do love a beer mission. Me and my rental bike headed out to find the map that would tell me where to where the hidden beer was to be found. 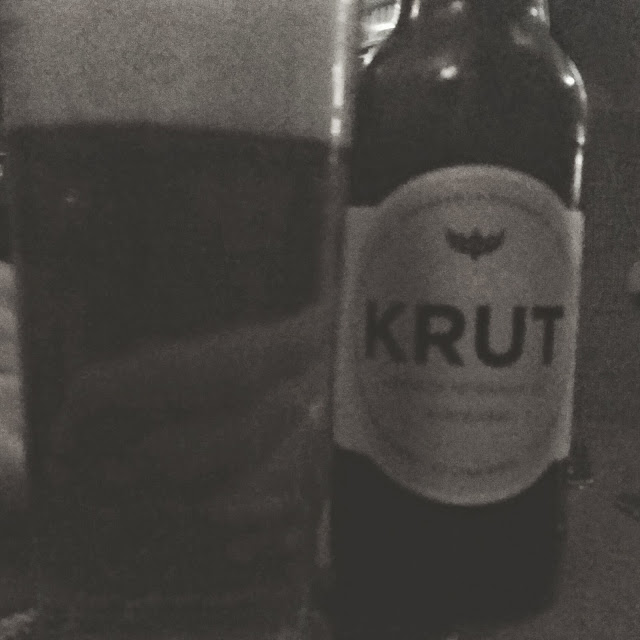 Caravelle does collaborations with Krut. The beer is fairly basic but well done. Caravelle itself is like a day bar/café type place with fancy type font and a home made feel. Lots of people on their computers, three draught lines and friendly staff. And.. The map. 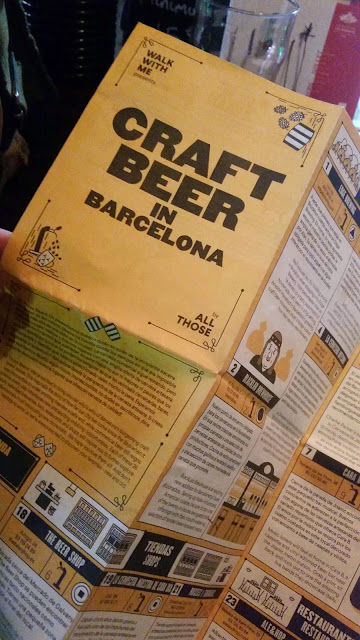 I paid 3.50€ for this treasure and didn't regret it for a moment. The boy was right, I wanted the map. 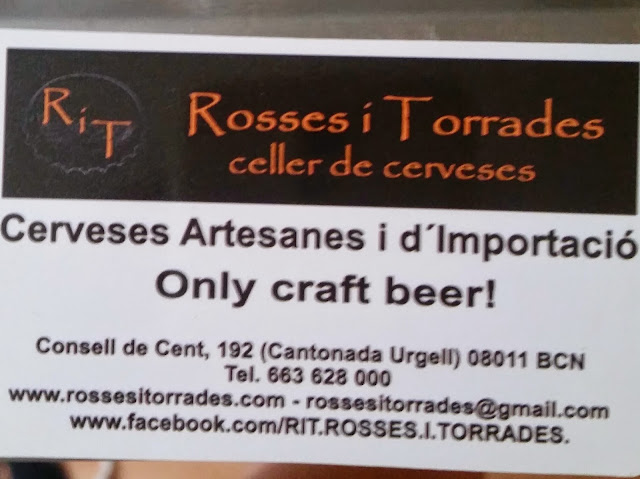 Rosses i torrades houses everything you want. The owner was charming and helpful, they have some tap times, mikeller hop vodka and a great selection. I picked up silly stuff :

It wasn't an Ipa, just as it said. Blah sweet Belgian style yeast with a bunch of hops. Il drink it, but I won't like it.

This little guy is the coolest thing ever. No idea where to find more, but it was 2€ and effing delicious. I want more!

I used the map throughout my two days in Barcelona but also relied heavily on local insights. One of my new friends tipped me to check out Mosquito - craft beer and dumpling. Of course.
Food, service, beer and intelligent beer serving staff, Mosquito Tapas wasn't on the map, but it's better that way. 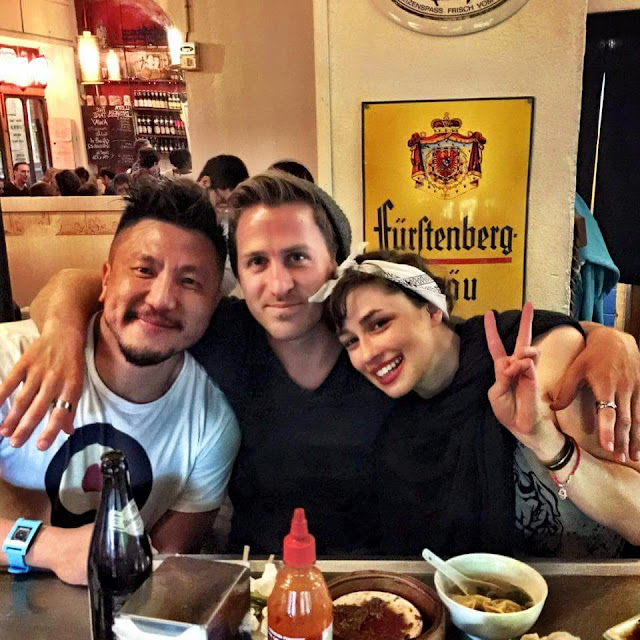 Look out for a bunch if this brand : 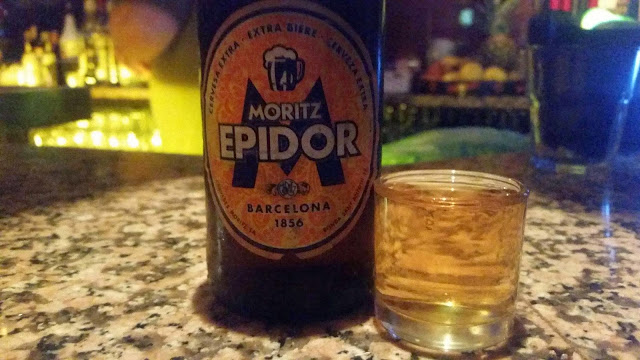 It's the local macro and the massive brewpub is somewhere. I've been before and was superficially entertained. Kid level stuff. Back to the real beer hunting.

Garage Beer Co. is a killer new local micro brew with a local to sample stuff.

Edge Brewing is getting bigger and better. A proper brewery with a wise range and fantastic team. I have a vid from my tour there on the ol' YouTube if you want some moving pictures from the place.

All in all, I can say Barcelona is on the rise in traveling beer geek sustainability. You can survive there, although there is a lot of craft beer, the map will guide you and you'll be impressed.

Feel free to drop me an email at Nitch@tastingnitch.com if you're heading that way and I'll connect you with my beer expert nerds in the area.

I'm off to go wash the heart shapes out if my eyes and get back to reality.

Posted by Unknown at 7:42 AM No comments:

Mrs. Mardi (my work wife for those of you just tuning in), just got back from a three week vacation in the American homeland. Birthplace of hipsters, bubblegum kush and mecca of craft beer : Seattle.

Okay, okay, maybe Portland is a better fit for the descriptors but she was in both places and she had much entertainment. Most importantly, she brought back beer.

First of all the labeling on the can is so extremely northwest that it's almost tragic. HARDCORE CUTE LIBRAL YOU CAN'T HANDLE THIS!

And then you have the liquid itself... Let's just say it's a one time thing. Rhubarb tart with a lingering sweetness and an under lining note of barbie plastic. 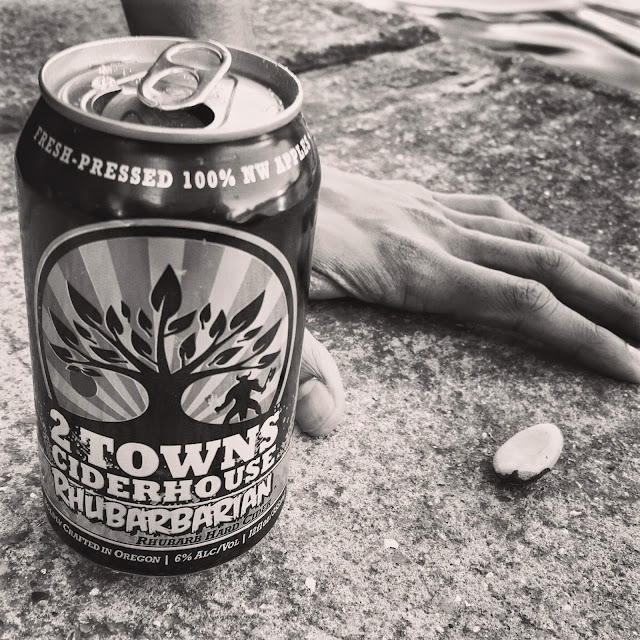 My friend here has a nut allergy. He is dangerously close to this nut. 2 towns CiderHouse is in more danger than he is of crossing the line. Take a step back Pacific north west people and make sure what your doing isn't 100% nutty crazy brain stuff.

Other then that, keep up the good work!

Posted by Unknown at 3:12 AM No comments:

Oh, who am I kidding, every night of my life is a girl night and I'm not even entirely sure what that statement means anyway.
Cuz my idea of a 'cozy night in,' is to soak my feet in hot water while smoking a cigar, drinking a beer and judging the neighbor's music taste (because it's drowning out nerd session of the new Star Wars VII Trailer). 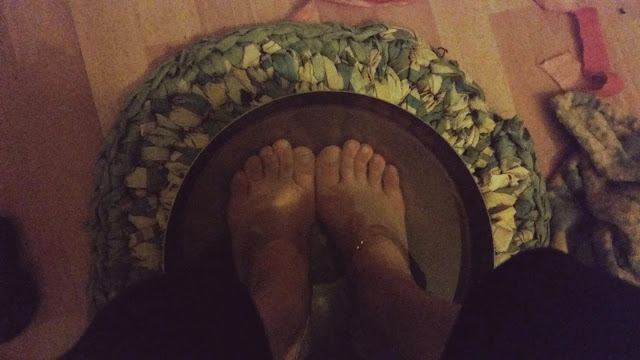 And tonight, my dear friends, I have a cigar that was hand transported from the Americas. North America to be specific. Florida, Cigar City Brewing to be exact.

My dear friends Jaclyn and Pierre from Bierocratie not only shared some of there killer American beers with me, they fed me, answered my French burocracy questions and then sent me on my way with a cigar. God effing bless them. Want to know how to win the heart of a Nitch? Well, that's how, ladies and gentle geeks; specialty craft beer, delicious food, insightful conversation, and cigars.

What I absolutely love about a beer like this is that makes zero sense. Dry-hopped smoked sour wheat ale. (insert all manner of bitter beer face men and confused people gifs)
I mean... Who thinks up this shit?

Can't complain though really, other than a lack of dry hopped character, which I would have persumed to present itself in the aroma, Smoke Signals starts out bacon, rolls into lemons and finishes a wheat shack. It's like a person who has been sitting next to a camp fire all day offers you a glass of unsweetened lemonade after you've been eating sliced wheat bread. I don't know in what world that situation would occur, but that's what's in the bottle.

The cigar is mild and rounded, a bit dry, but what do you elect from people who don't have a travel humidor.

I'm blessed, relaxed to the max and going to go troll YouTube.

Cheers to nights home alone (with the Internet!) 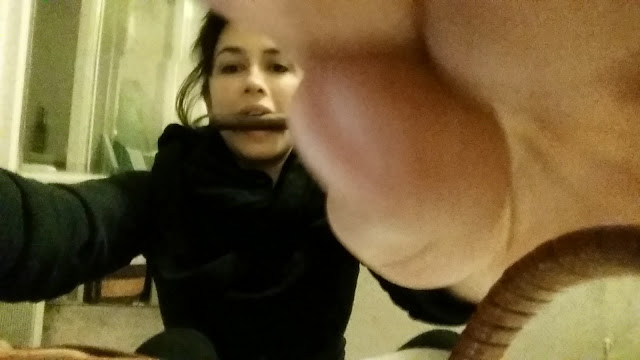 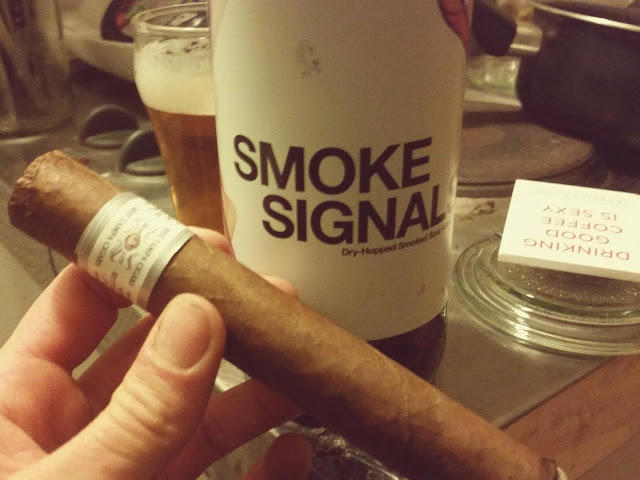 Posted by Unknown at 2:15 PM No comments:

Paris beer in the spring 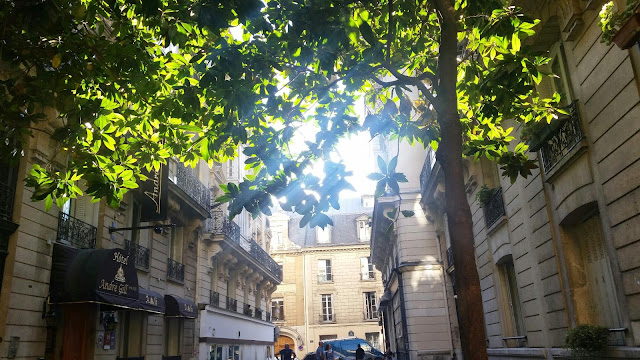 The sun has just started blasting through the smog here in Paris and with the heat comes a change in wardrobe, a rush to green open spaces and the welcoming of warm weather beers.

Officially I've put away my furs, knits and thick socks and pulled out the swim suit, rubber slippers and mini skirts! Nothing feels better than a massive intake of vitamin D, my dear seasonal weather friends. My white skin (newly steered of it's own winter fur coat) is oiled and ready for baking. 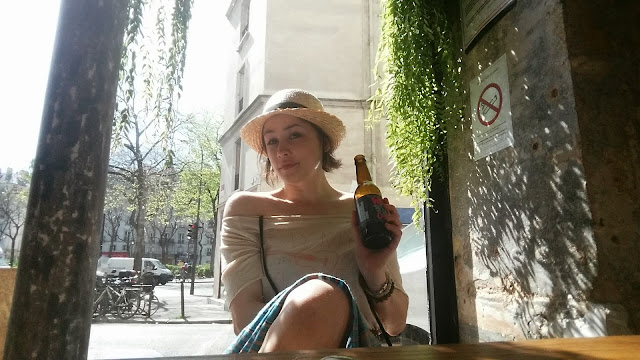 Although I'm a year round Stout and Porter drinker there is something wholly satisfying about demanding the coldest, most refreshing beers the bottle shop has to offer. So, on my way down to Café Chilango,  I stopped by Bierrissm to say hello to Arthur and pick up something that would match my spring skirt and wicker hat.

While there I found out that they'll be offering low priced artisan beer on pression (aka on tap)! Since they are located in a beautiful and deliciously stocked covered market, their neighboring selections of food products makes it my next social day out destination. 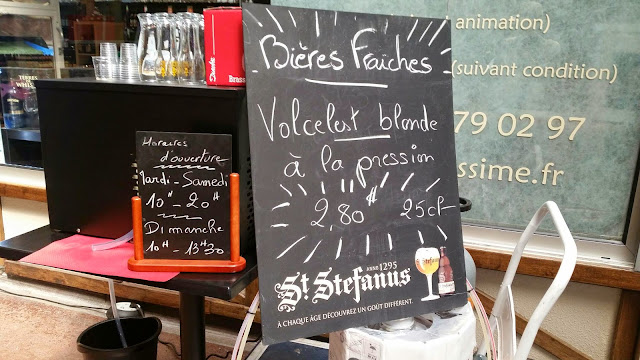 To battle such hypocrisy, here are my three top spring beers 2015 : 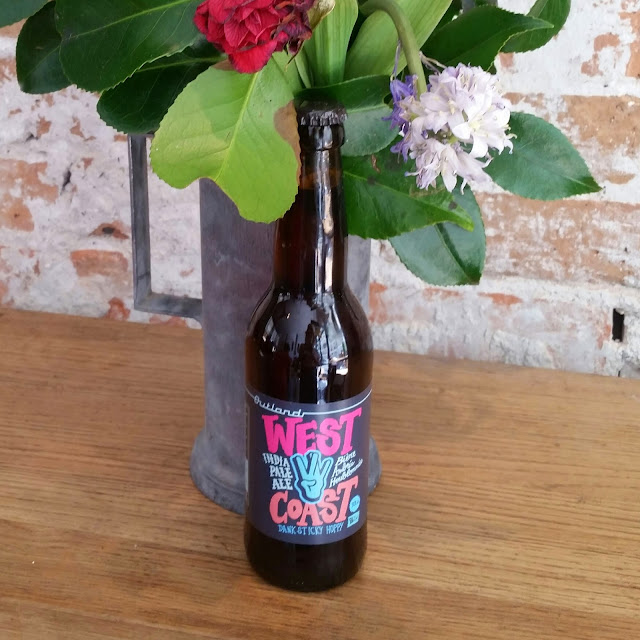 Local brewer Yann, the maker of an another beer named simply 'merica,  knocks this 'dank & sticky' West coast style Ipa outta the park. Full of grassy, grapefruit pith hops and a lasting, rounded bitterness, this is THE California lovin' beer of Paris. 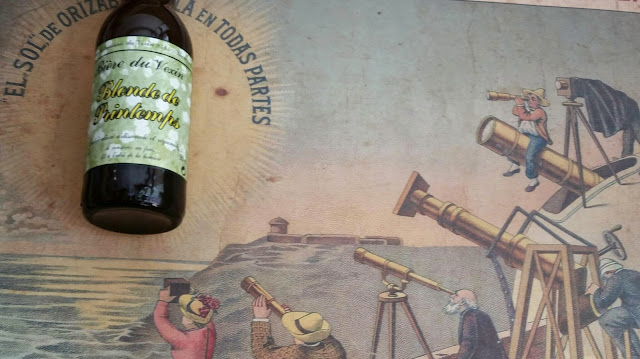 Although generally I avoid beers that style themselves as colors, this Ile-de-France beer naming itself after the season of hand holding and lady bugs, hits the right notes. Still a bread mouthful, as most blonde beer deliver, but lighter in body with cloying sweetness. If you're looking for a true example if spring time Parisian beer, here it is. 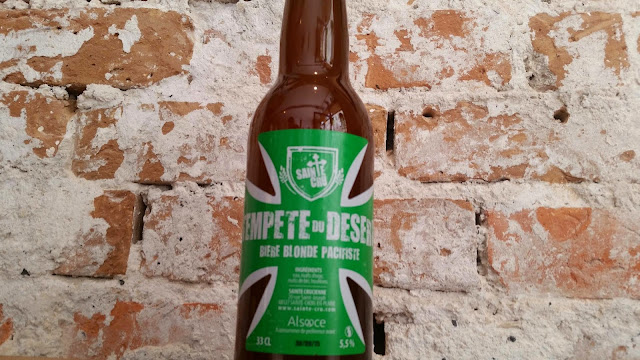 My initial transition skills when viewing this beer label had me thinking about tempting dessert items! Alas, (and much to my dismay) it means desert storm. Welcoming the inevitable meltdown that Paris is about to have in the summer, Tempete du Desert displays all the hallmarks of an American invasion. Another blonde but this time calling itself a 'Biere blonde pacifiste,' we get that same mouth coating and yeast heavy style but with a slight hop character. The middle ground between the two others, what we have here is a peace keeper and a thirst quencheder

So there you have it, my three top beers for the blossoming season. 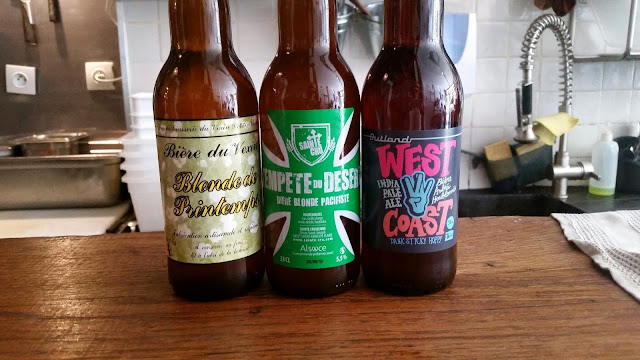 Link me yours via Facebook, Twitter, Instagram or email, and if you're ever in Paris, whatever the season, let me show you around our nouvelle monde de bière !

Posted by Unknown at 6:09 AM No comments: